ST. JOHN'S, June 21, 2017 /CNW/ - Anaconda Mining Inc. ("Anaconda" or the "Company") – (TSX:ANX) is pleased to announce the commencement of a research and development project to develop, prototype and optimize a new technology to mine steeply-dipping narrow gold veins, that cannot be mined cost-effectively with existing technologies ("the Research Project").

The Company has subcontracted expertise of the Faculty of Engineering and Applied Science at Memorial University of Newfoundland (MUN) to support the Research Project.

"This narrow vein research and development projects fits with Anaconda's objectives of optimizing mineral resources and maintaining sustainable employment at the Point Rousse Project in the Baie Verte region. Anaconda has narrow vein hosted gold mineralization within our property boundaries. We hope to leverage our culture of innovation, and the expertise at Memorial University to ultimately adapt and create technology that will position this province as global leaders in narrow vein mining."

While many gold deposits can be effectively mined using current mining technology, there are numerous deposits that despite high grades, present unique challenges with traditional mining methods because of their narrow vein geometry. There are numerous mineralized veins such as this within Newfoundland and Labrador.  One example is the Romeo & Juliet prospect ("Romeo and Juliet") at Anaconda's Point Rousse Project, near Baie Verte, NL where the Company has an operating mill.  Romeo and Juliet is a steeply dipping, gold-bearing quartz vein ranging in size from approximately 0.5 meters to several meters wide, locally carries significant gold grades and could represent a potential source for gold ore with the right technology. In order to facilitate the mining of this and other similar deposits, the intent of the Research Project is to develop a mining technology to allow for the economic extraction from mineralized narrow veins.

On Friday, June 16, Federal and Provincial representatives announced financial support for the Project. Seamus O'Regan, Member of Parliament for St. John's South-Mount Pearl, on behalf of the Honourable Navdeep Bains, Minister of Innovation, Science and Economic Development and Minister responsible for the Atlantic Canada Opportunities Agency (ACOA), announced more than $1.5 million for the project through the Atlantic Innovation Fund. The Honourable Cathy Bennett, provincial Minister of Finance, on behalf of the Honourable Christopher Mitchelmore, provincial Minister of Tourism, Culture, Industry and Innovation announced a provincial government investment of more than $520,000 for the initiative through the Research & Development Corporation through the GeoEXPLORE program.

Federal and Provincial funding will offset the technical and financial risks of developing and optimizing a Narrow Vein Mining system for use in steeply-dipping narrow gold veins. If successfully developed, this technology has the potential to be used for similar mineral properties owned by Anaconda and other gold deposits throughout Atlantic Canada and the rest of the country.

The Federal ACOA loan of $1.5 million for the project through the Atlantic Innovation Fund is conditionally repayable upon the success of the project. The $520,000 received through the Provincial GeoEXPLORE program is a grant. 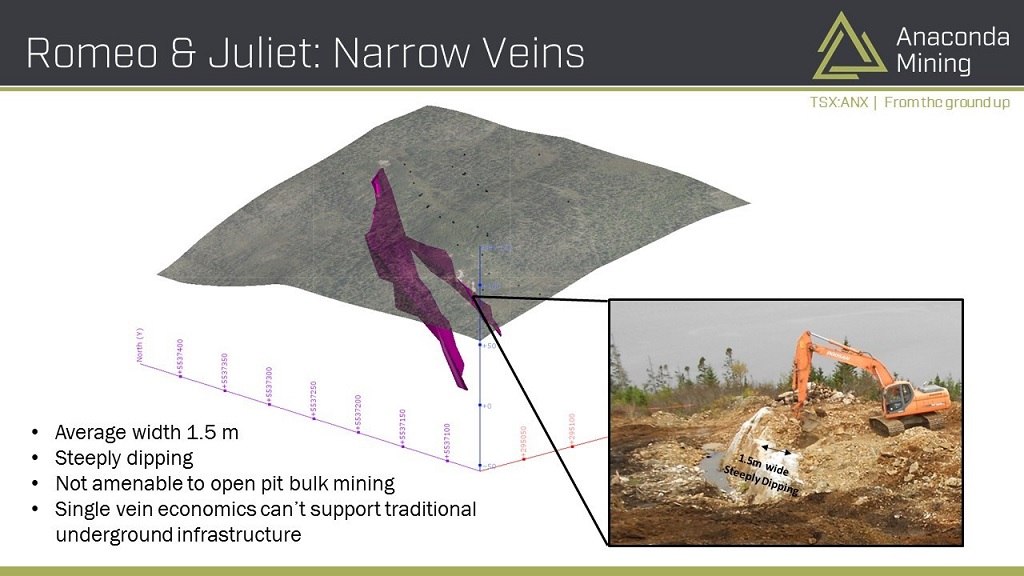 Anaconda Mining is a TSX-listed gold mining, exploration and development company, focused in the prospective Atlantic Canadian provinces of Newfoundland and Nova Scotia. The Company operates the Point Rousse Operation located in the Baie Verte Mining District in Newfoundland, comprised of the Pine Cove open pit mine, the fully-permitted Pine Cove Mill and tailings facility, the newly discovered Argyle Deposit, and approximately 6,300 hectares of prospective property. Anaconda is also developing the recently acquired Goldboro Project in Nova Scotia, a high-grade Mineral Resource, with the potential to leverage existing infrastructure at the Company's Point Rousse Operation.

The Company also has a pipeline of organic growth opportunities to leverage existing infrastructure, including the Viking and Great Northern Projects and the Tilt Cove Property in Newfoundland.

Market Wire News is a media platform, the information on this page was provided by JanMiner via Quote Media. Read our full disclaimer.

Great Products for any trader on Amazon