ACMR - 4 Reasons Why ACM Research is Making an Impact in...

home / articles / ACMR - 4 Reasons Why ACM Research is Making an Impact in...

4 REASONS WHY ACM RESEARCH IS MAKING AN IMPACT IN CHINA Fabricators of advanced integrated circuits, or chips, use the Company’s wet-cleaning and other front-end processing tools in numerous steps to improve product yield, even at increasingly advanced process nodes. ACM Research has designed tools for use in fabricating foundry, logic and memory chips, including dynamic random-access memory, or DRAM, 3D NAND-flash memory chips, and compound semiconductor chips. They also develop, manufacture and sell a range of advanced packaging tools to wafer assembly and packaging customers. 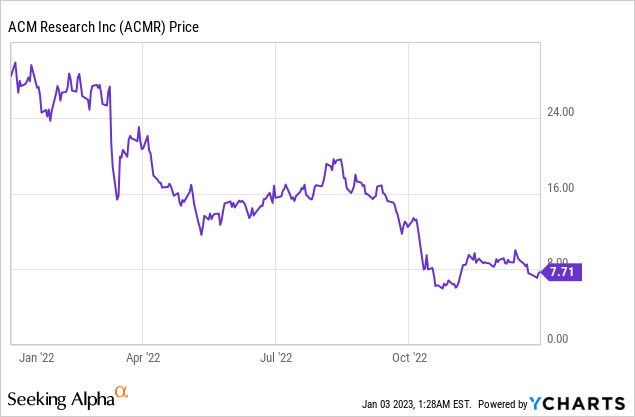 Well Poised to Participate in Asia Expansion
Though the Company is headquartered in Fremont CA, it has more than 875 employees globally. The employees are skilled and experienced in fields such as research and development, manufacturing, sales and marketing, and help the Company operate effectively in the various markets that it operates in.

ACM Research has complete R&D, engineering and manufacturing operations at its Zhangjiang High-Tech Park facility in Shanghai, China, and a second subsidiary ACM Research (Wuxi), Inc., to better serve customers in that region. Advanced service coverage has also been positioned at strategic locations around the globe, including Beijing, Taiwan, Korea, and the U.S., to provide world-class support for customers worldwide.

Skilled employees and robust manufacturing and operational facilities have helped the Company to establish a significant customer base in China. Some of the top front-end and back-end customers served by the Company are shown in the image below:

ACM Research’s strong presence in China is also evident from its FY21 financial results – during this period, total revenue for the Company stood at $259.751 m, out of which $258.615 was attributable to its operations in Mainland China.

Interestingly, the semiconductor industry in China is projected to grow at 4% CAGR, and the Company seems prepared to take advantage of the same.

The Company already has state of the art production facilities in Chuansha, Shanghai; and construction is in process for a new R&D and production center in Lingang, Shanghai. It is estimated that Lingang facilities will provide up to $1.5 billion of capacity gradually starting 2023.

“Many of our customers are 28nm and above logic device providers. We anticipate a need to increase capacity at more mature nodes, as mature node production in China is significantly lower than consumption. The new PECVD tool provides ACM with another opportunity to better serve our customers while addressing the global logic and memory market. We estimate that our total addressable global market will double with the Ultra PmaxTM category announced today and the Ultra Track category announced last month.”

The above measures taken by the Company seem to ensure that it will achieve its aim of benefitting from the anticipated Asia expansion.

Introduction of Innovative Products
The Company presently holds a strong IP portfolio of more than 410 patents issued in the U.S., China, Japan, Singapore, South Korea and Taiwan. ACM Research has established important intellectual property in its proprietary Space Alternated Phase Shift (SAPS™) and Timely Energized Bubble Oscillation (TEBO™) megasonic cleaning technologies, along with their special chamber and platform designs. The TEBO technology in particular has been groundbreaking and revolutionary in enabling future generations of semiconductor circuits.

As far as timeline is concerned, in 2007 the Company began to focus its development efforts on single-wafer wet-cleaning solutions for the front-end chip fabrication process. In October 2008, ACM Research Shanghai won an R&D grant to develop and commercialize the 65-45nm stress-free Cu polishing technology (SFP™).

The Company introduced its SAPS megasonic technology, which can be applied in wet wafer cleaning at numerous steps during the chip fabrication process, in 2009. In January 2014 the company won another R&D grant to develop ACM’s new electro-copper plating (ECP™) technology.

It introduced its TEBO technology, which can be applied at numerous steps during the fabrication of small node two-dimensional conventional and three-dimensional patterned wafers, in March 2016. The Company has designed its equipment models for SAPS and TEBO solutions using a modular configuration that enables it to create a wet-cleaning tool meeting the specific requirements of a customer, while using pre-existing designs for chamber, electrical, chemical delivery and other modules.

In August 2018, the Company introduced its Ultra-C Tahoe wafer cleaning tool, which can deliver high cleaning performance with significantly less sulfuric acid than typically consumed by conventional high-temperature single-wafer cleaning tools. Based on its electro-chemical plating (“ECP”) technology, the Company introduced in March 2019 its Ultra ECP AP, or “Advanced Packaging,” tool for bumping, or applying copper, tin and nickel to semiconductor wafers at the die-level, and its Ultra ECP MAP, or “Multi-Anode Partial Plating,” tool to deliver advanced electrochemical copper plating for copper interconnect applications in front-end wafer fabrication processes. The Company also offers a range of custom-made equipment, including cleaners, coaters and developers, to back-end wafer assembly and packaging factories, principally in the PRC.

Currently, an estimated Serviceable Available Market (SAM) of $8 billion is addressed by ACM Research’s current and near-term product portfolio. The Company targets to double its SAM with the introduction of two major new product categories in 2022. Next generation TEBO, Tahoe and other new products are expected to expand SAM in the wafer clean segment, along with plating for front and back end, furnace and semi-critical tools.

Internal Long-Term Target for $1B in Revenue
From FY17 to FY22, total revenues for the Company increased from $37 million to $260 million, which represents 63% CAGR over a period of 5 years.

Its product mix contribution over the last 3 years is shown below: More recently, in Q3 FY22, the Company clocked revenues of $133.7 million (up 99.5% from Q3 2021) and total shipments of $163 million. The improvement was due to strong performance from flagship cleaning tools and incremental contribution from new ECP and furnace products.

“We saw good progress at major semiconductor manufacturers outside of China. The evaluation is going well of two cleaning tools at the U.S. facility of a large U.S.-based manufacturer, and we are gaining traction with potential new customers in Europe and other regions. Construction of our Lingang production and R&D center is on track, and we are in the final stages of selecting a site to expand our R&D and production facilities in South Korea.”

Going forward, the Company expects to continue with its upward trajectory through a four-pronged approach – introduction of new products, acquisition of new customers, increase in capacity and a disciplined M&A approach to broaden product portfolio, add complementary technologies and increase access to the global market.

More specifically, the Company hopes to achieve an internal longer-term target for $1B in revenue.

Given ACM Research’s commitment to providing customers with leading-edge technology, world-class products and unexcelled service and support, as well as its recent exponential growth, it seems that the Company will succeed in achieving its target in record time.

Robust Manufacturing and Production Facilities
The Company conducts a substantial majority of product development, manufacturing, support and services in the PRC, with additional product development and subsystem production in South Korea. Substantially all the tools are built to order at manufacturing facilities in the Pudong region of Shanghai, whose facilities now encompass a total of 236,000 square feet of floor space for production capacity, with 100,000 square feet having been added in 2021.

In May 2020 ACM Shanghai, through its wholly owned subsidiary Shengwei Research (Shanghai), Inc., entered into an agreement for a land use right in the Lingang region of Shanghai. In July 2020 Shengwei Research (Shanghai), Inc. began a multi-year construction project for a new 1,000,000 square foot development and production center. that will incorporate state-of-the-art manufacturing systems and automation technologies, and will provide the floor space to support significantly increased production capacity and related research and development activities.

Chip manufacturers in the PRC and throughout Asia demand equipment meeting their specific technical requirements and prefer building relationships with local suppliers. The Company expects to continue to seek to leverage their local presence to address the growing market for semiconductor manufacturing equipment in the region by working closely with regional chip manufacturers to understand their specific requirements, encouraging them to adopt SAPS, TEBO, Tahoe, ECP, furnace and other technologies.

This way, the Company expects to continue to design innovative products and solutions to address customer needs, and thereby sustain, or even surpass its past records of revenue growth.