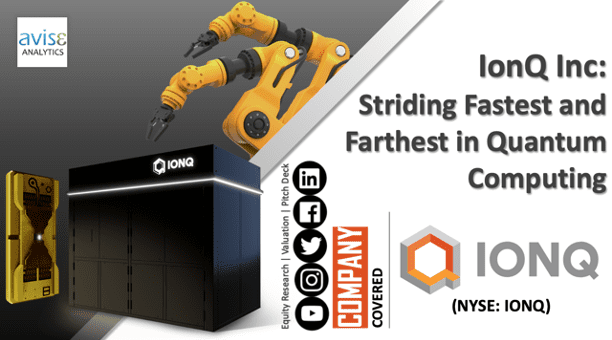 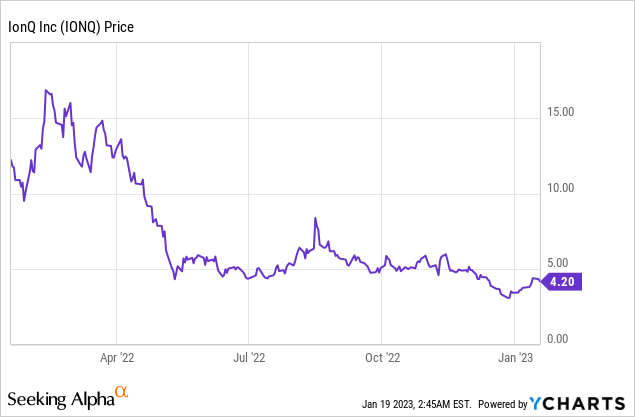 The Company
IonQ, Inc. sells access to several quantum computers of various qubit capacities and is in the process of researching and developing technologies for quantum computers with increasing computational capabilities. They make access to quantum computers available via three major cloud platforms, Amazon Web Services, Amazon Braket, Microsoft’s Azure Quantum and Google’s Cloud Marketplace, and also to select customers via their own cloud service. This cloud-based approach enables the broad availability of quantum computing as a service (QCaaS).

The Company is especially empowered by unique technological advantages. IonQ’s technology involves the use of individual atomic ion cubits in an ion trap – these are superior to competing cubit platforms, creating the ability for IonQ to move farther, faster than the competition.

In March 2022, the Company was named to TIME’s annual TIME100 Most Influential Companies list, given the technical breakthroughs it achieved in 2021. During this time period, IonQ introduced IonQ Aria, the world’s most powerful quantum computer, based on standard application-oriented industry benchmarks; discovered a new family of quantum gates that can accelerate quantum algorithms and can only be conducted on IonQ and Duke University systems; became the first company to use barium ions as qubits to further enable advanced quantum computing architectures; and secured a public-private manufacturing partnership with Pacific Northwest National Lab (PNNL) to produce barium qubits.

IonQ is also the only company with its quantum systems available through the cloud on Amazon Braket, Microsoft Azure, and Google Cloud, as well as through direct API access.

Hence, since its inception in 2015, IonQ has established itself not only as a leader in quantum computing but also inscribed a proven track record of innovation and deployment.

Prestigious Partnerships and Customer Contracts
Significant milestones achieved by the Company in the previous year were as follows: It seems that IonQ’s partnerships would be effective in helping the Company accomplish pertinent goals such as generate more revenue, develop relationships with current and future customers, obtain equipment and facilities, attain expertise in relevant markets and obtain sales and marketing support.

“With our new German and Israeli presence, we believe IonQ is well positioned to support global commercial partners as they take advantage of our world-class, trapped-ion systems for a multitude of industries. By incorporating in Germany and Israel, we are taking steps to truly embed ourselves within the European and Israeli tech ecosystem, democratizing access to quantum and creating new pathways to pursue curiosity. We are being clear – IonQ has a long-term commitment to the regions.”

Most recently, on Jan 10th, 2023, the Company announced that the Entangled Networks team joined IonQ to work on next generation networked quantum computer architectures and full-stack quantum compilers. Entangled Networks is also expected to serve as beachhead for IonQ in Toronto, thereby helping to strengthen its growing international presence.

Increasing Market Opportunities
Quantum computing is expected to change all industries, from farming to banking to logistics. Quantum computing has vast potential, with experts predicting a total addressable market of ~$65 billion by 2030.

In particular, quantum computers would be beneficial in the following use cases

It is to be noted that United States government investment in quantum information science R&D nearly doubled from 2019 to 2022, going from a reported $449 million to a requested $877 million.

As far as IonQ is concerned, it is the only public pure-play quantum opportunity. The Company is working on error reduction in the first phase of quantum computing. It will enter phase two by perfecting error correction.

In fact, even IonQ’s competition has partnered with the Company – investors and partners in IonQ include Alphabet Inc, Amazon.com Inc, Microsoft Corp – these are the companies who are aware of where IonQ stands in the quantum ecosystem.

Impressive Investor Base
As of December 31, 2021, the Company had cash and cash equivalents of $399 million and available-for-sale securities of $203.5 million, with $123.4 million classified as short-term investments and $80.1 million classified as long-term investments. It is expected that the Company’s cash, cash equivalents and investments as of December 31, 2021 would be sufficient to meet working capital and capital expenditure needs for the next 12 months.

More recently, as of September 30, 2022, cash, cash equivalents and investments were $555.8 million. The strong cash position of the Company is not surprising, given its impressive investor base. As early as 2017, the Company was able to complete a $20 million series B round led by New Enterprise Associates (NEA) and GV (formerly Google Ventures), with participation from new strategic investors.

However, despite all these positive indications, it is worth mentioning that the Company is still in the early stages of commercial growth. Since inception, IonQ has incurred significant losses – recently, these amounted to $106.2 million and $15.4 million for FY21 and FY20, respectively. As of December 31, 2021, the accumulated deficit stood at $145.8 million. This trend is expected to continue for the next few years as the Company prioritizes reaching the technical milestones necessary to achieve an increasingly higher number of stable qubits and higher levels of fidelity than that which presently exists, as these are prerequisites for quantum computing to reach broad quantum advantage.

Having said that, it is important to keep in mind that the Company has already started exhibiting exponential revenue growth. IonQ recognized revenue of $2.8 million for Q3 FY22, above the midpoint of the previously provided range, compared to $233 thousand in the prior year period. For FY21, the Company clocked revenues of $2.1 million, compared to zero revenue the previous year.

For FY22, IonQ has provided a revenue outlook range of $10.2 million to $10.7 million, and bookings range of $23 million to $27 million. Thus, it can be said that IonQ seems to be one of the fastest growing companies in the field of quantum computing, poised to scale unimaginable heights in the future.