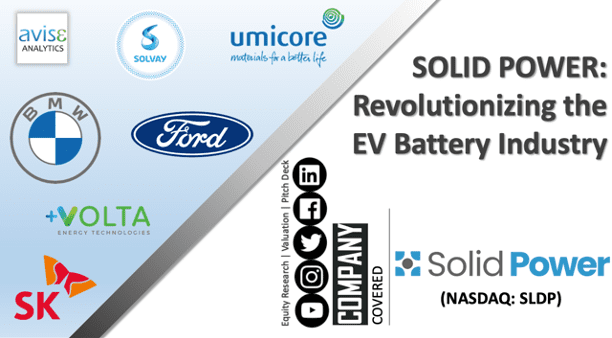 Frank Weber, Member of the Board of Management BMW AG, Development, commented,

“BMW remains committed to the pursuit of all-solid-state batteries, a technology which we believe has significant potential for the future. We look forward to working even more closely with Solid Power and adding the capability to produce solid-state cells based on Solid Power’s designs at our own pilot facility.” 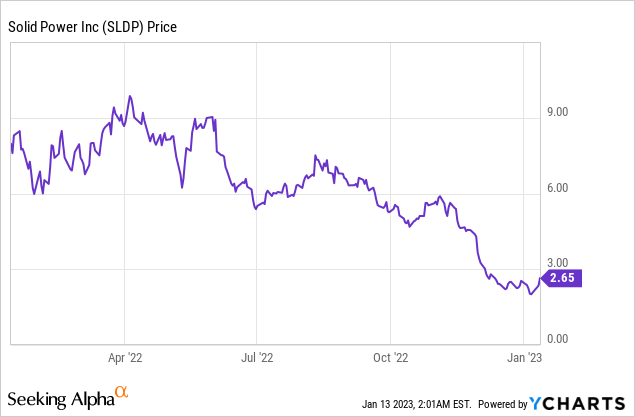 Industry Outlook
The Global Carbon Project, a leading non-governmental agency studying the effects of emissions on climate, estimated in 2019 that humans emit over 36.4 billion tons of CO2 equivalent greenhouse gases per year. The Global Carbon Project calculated that CO2 emissions from fossil fuels will rise between 4.1% and 5.7% in 2021 creating a new record level after a fall of 5.4% in 2020 from COVID 19-related lockdowns.

It is expected that the widespread use of fully electric vehicles would significantly cut passenger vehicle emissions and help to reduce human-caused CO2, hence the United States is making significant investments to prepare for the electrification of vehicles.

In August 2021, President Biden signed an executive order setting a goal that 50% of all new passenger cars and light trucks sold in 2030 be zero-emission vehicles, including battery electric, plug-in hybrid electric, or fuel cell electric vehicles. In February 2022, the United States Department of Energy issued two notices of intent to provide $2.91 billion to boost production of the advanced batteries that are critical to rapidly growing clean energy industries of the future, including electric vehicles, as directed by the Bipartisan Infrastructure Law.

The Department of Transportation and Energy also announced $5 billion to be made available under the new National Electric Vehicle Infrastructure (NEVI) Formula Program to build out a national electric vehicle charging network. In addition, there are federal and state tax credits available to consumers who purchase certain electric vehicles.

Thus it is safe to say that the Electric Vehicle (EV) Transition is underway and this market is expected to grow significantly over the next few years.

Drawbacks of Current Lithium-Ion Technology Impede the Mass Adoption of Electric Vehicles
Liquid or gel electrolyte-based lithium-ion battery cell technology helped introduce the possibility of broad adoption of electric vehicles. However, it seems that this first-generation technology is reaching a practical limit where further investments into development provide diminishing returns due to concerns about safety, energy density, and high temperature stability.

In fact, Solid Power has already partnered with industry leaders, such as Ford Motor Company, BMW of North America LLC, and SK Innovation Co., Ltd., to refine and validate their all-solid-state cell designs and the sulfide-based solid electrolyte they manufacture at our headquarters in Louisville, Colorado.

Company Products and business Model
The Company’s sole focus is on the development and commercialization of solid electrolyte materials and all-solid-state battery cells for the fast-growing battery-powered electric vehicle market. Additionally, the Company is developing their All-Solid-State Platform to meet the performance and cost demands from both consumers and automotive OEMs, with the goal of outperforming the best performing liquid or gel electrolyte-based lithium-ion technologies in driving range, battery life, safety, and cost. Over the long-term, the Company is expected to become a leading producer and distributor of sulfide-based solid electrolyte material, which, due to its revolutionary proprietary technology, may have higher margins than the battery cell manufacturing business and require substantially less capital equipment investment than battery cell production. Over the short term, it aims to achieve the following milestones:

In addition, the Company secured additional liquidity to support their efforts through various financing transactions. In May 2021, they announced a $135.6 million Series B investment round (the “Series B Financing”), led by BMW Holding B.V. and Ford. In conjunction with this capital infusion, the Company also announced an expansion of our joint development agreements (JDAs) with BMW and Ford to develop all-solid-state battery cells for future electric vehicles. In December 2021, Solid Power completed the business combination, as a result of which they secured $495 million, net of transaction expenses, of additional capital to pursue research and development activities.

Thus, the Company ended FY21 with cash and cash equivalents of $513 million and marketable securities of $76 million, which is expected to support its continued technical development and planned scale-up of operational capabilities.

Even at the end of Q3 FY22, its liquidity position remained strong with total liquidity totaling $507.6 million. This is despite the fact that capital expenditures during the third quarter and first nine months of 2022 were $17.0 million and $47.9 million, respectively, representing Solid Power’s ongoing investment in the company’s technical development and operational capabilities.

For FY22, total cash investment is expected to be between $120 – $130 million, and the Company expects to have total combined cash, cash equivalents, marketable securities and long-term investments of between $460 to $470 million at the end of the year.

Thus it seems that Solid Power has enough capital to achieve its short-term milestones, along with the ability to raise more capital, if needed.

As far as income is concerned, revenue for FY21 was $2.7 million and operating loss was $26.5 million, including $17.1 million in research and development costs. FY21 net income attributable to common stockholders was $12.7 million, or $0.11 per diluted share.

As per revenue guidance provided at the end of FY21, management expected FY22 revenue to range from $3.0 million to $5.0 million.

For Q3 FY22, revenues were $2.8 million, bringing total year-to-date revenue to $7.6 million. This reflects the management’s capability to exceed planned revenue goals well ahead of time, along with strong execution against strategic milestones.

As the pace of EV technology adoption increases, battery customers have also intensified their interest and commitment to Solid Power’s all-solid-state value proposition. To meet the anticipated demand, the Company is accelerating investments in operations, production equipment, and technology development. Thus, given the on-going macro scenario as well as company fundamentals, it seems Solid Power is well on its way to scale new heights.